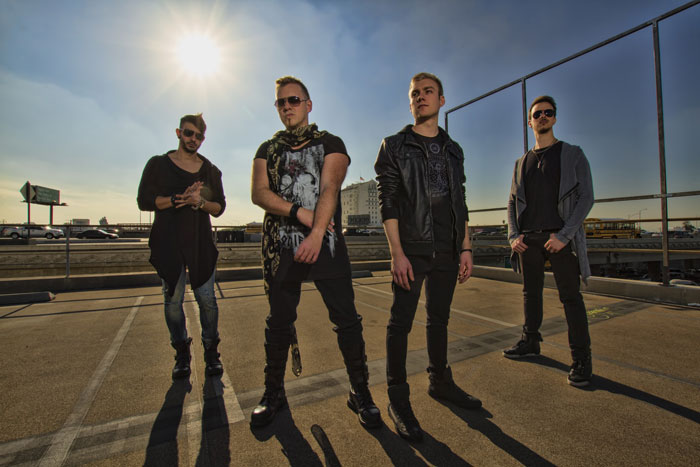 We are very excited and happy to welcome the band Disciples of Babylon to MODELSMANIA! We are pleased to be featuring these guys in this issue. Disciples of Babylon is an international rock band based in Hollywood, California. The group was founded in 2012 and includes Eric Knight on lead vocals and rhythm guitar, lead guitarist Ramon Blanco, bassist Gui Bodi and on drums Chris Toeller. In 2012, Eric Knight met Ramon Blanco while attending an alumni event at
the Musician’s Institute College of Contemporary Music in Hollywood, which is subsequently all the band members’ alma mater. After seeing a video of Blanco conducting a guitar soloing tutorial on YouTube, Eric immediately contacted Ramon and expressed interest in starting a band with him. The chemistry between both musicians was undeniable as they wrote the song “Arrived”, featured on their debut EP, during their first meeting together. From that moment on, Eric Knight and Ramon Blanco would spend their time writing and perfecting new material, while plotting their next steps in the band’s evolution. That evolution manifested itself in the form of bassist Gui Bodi, who attended school with Ramon and also worked with him previously on several music related projects. Gui came highly recommended by Ramon,
and after their initial meeting, Eric immediately agreed that he was the right choice for the band, and they both
extended an invitation to be the group’s official bassist. Their debut EP release ‘Welcome to Babylon’ was released last fall and was produced by Grammy winner Andres Torres whose engineering work on Grammy & Latin Grammy winning (La
Santa Cecilia, Alejandro Sanz) has put him on the map in the Latin world as one of the fastest rising young producers in the genre today. This was his first foray working with an American rock act. The album was mastered by Grammy winner Joe LaPorta (Foo Fighters, Imagine Dragons, Vampire Weekend) making this a world class project all the way. The band is a cross between Muse, Foo Fighters & 30 Seconds to Mars to give you some musical context as to the band’s direction. Karma is their debut single off the EP which is building traction and getting an incredible reaction from stations around the world such SWR FM (Sydney, Australia), Total Rock FM (London England) as well as specialty rock shows including On the Verge – 98.3 FM New Jersey, The Shift Music from the UK among others. Karma was selected by the Eclectic Music Blog as #75 of the “Top 100 Songs of 2015” alongside acts such as: Muse, Royal Blood, Foo Fighters & U2. They were also selected as one of the “Top 25 Best Critiqued Bands” of 2015 in the year end edition of Music
Connection Magazine. In addition, over the last few months they’ve built a very organic and extremely loyal following on social media that continues to grow every day.
You can see the complete feature and the interview in our May 2017 issue of ModelsMania.

Billie Eilish – The Future of Pop?

Billie Eilish – The Future of Pop?