Turning off The Tapes

“Breaking the Cycle of Self-Defeating Internal Commentary”
We are all born into this world with a relatively clean slate. While we inherit certain predispositions from our parents, our general outlook on the world and ourselves is completely free of external influences. Early childhood is a time of boundless enthusiasm, limitless confidence and a fearlessness that leads to scrapes and stumbles that help build life-affirming memories and some first-rate learning opportunities. And it is precisely that learning curve that leads to a double-edged sword of invaluably acquired wisdom and misleading, self-destructive self-concept messages that often times negate a great deal of the knowledge that is gleaned on life’s journey. As each day passes and children grow towards adolescence and early adulthood, their perceptions of themselves are molded, shaped and warped by their social interactions and perceptual experiences that lead to sometimes realistic but often times erroneous internal dialogues that become endlessly repeated tapes played unforgivingly by the darkest corners of consciousness. Added to this of course there is the persistent impact on the brain and its development by all forms of media. While there is no question that boys can have their self-concepts negatively influenced by all the afore-mentioned forces, it is girls and their far more complex psyches that are deeply prejudiced by all that they see, hear and experience going on around them. By the time they are nine and ten years old, girls are far more likely to be hyper critical of their looks, body types, physical fitness, attractiveness and sense of self. By the time these pre-teen girls have reached fifteen and sixteen years old and have begun to amass as greater store of social experiences, those fogs, veils and filters of what they “think they look like, what they hope to look like and what family, friends and love interests tell them they look like” have calcified into a series of whispers and mantras that are ceaselessly replayed inside their minds, reinforcing deeply distorted beliefs as to who and what they are and look like. I have seen many a young woman walk into my studio, as lovely and stunning as can be imagined, but with little or no self-esteem and owning as inaccurate a self-concept as can be imagined. 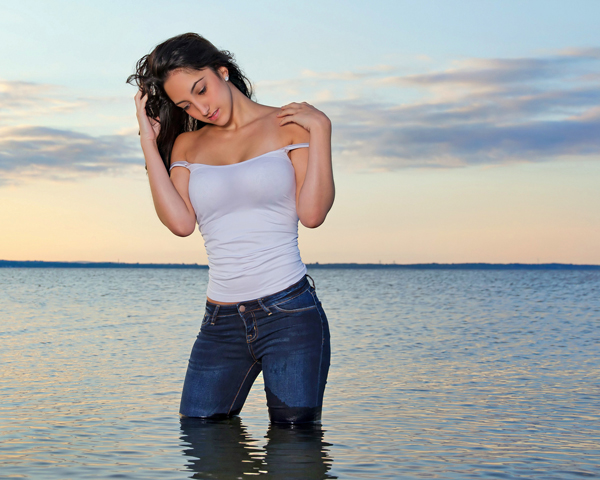 On the surface, this problem seems to be just a simple issue of self-examination and then some time spent strengthening the self-esteem bulwarks in a girl’s heart and mind, but the issue is far more intricate and serious. Overwhelming social and cultural programming can turn simple and unassuming messages into personal belief systems that are as rigidly inflexible as concrete and just as difficult to remove. For example, a young woman once told me that she had big ears. I asked her to pull back her incredibly long and thick hair to show me her ears. They were actually quite small.
You can find more of this article in our November 2014 issue of ModelsMania