Trending Topics
THE CHAUVINIST CULTURE WE LIVE IN
Van Halen: The Successes and Struggles
How to become a virtual reality game developer
Why Bali is an Amazing Location for Photo...
The Evolving Face of Rock and Roll
Sex in Today’s Modern World
Out with the Old is Pure Foolishness
The All-American Icon
How to Fix The Music Industry
The Increasing Popularity & Sales of Vinyl Records
Home HOT EXCLUSIVES Van Halen: The Successes and Struggles

Anyone who grew up in the 1970s and 80s is familiar with the energizing metal sounds of Van Halen that dominated airwaves and rocked stereos across the country. The band originally began with two brothers – Eddie and his older brother Alex – who, together with their parents, had emigrated from Holland to California. Their musically talented dad and mom encouraged them to learn classical piano, but the teenagers had something else on their minds… rock & roll!
The brothers formed a band and, after several name changes, finally settled on Van Halen which consisted of founders Eddie on lead guitar and Alex on drums along with Michael Anthony on bass and vocalist David Lee Roth as their front man. For several years after its humble beginnings in 1974, the group played cover music in mostly southern California venues during which they slowly worked in their own songs and perfected their unique style of music. Roth offered a wild, larger-than-life stage performance while Eddie dazzled listeners with self-taught techniques that were backed by the powerful drum and bass beats of Alex and Michael.
The group’s persistence and experimentation paid off. In 1977, KISS bassist Gene Simmons saw their act at the Starwood club in West Hollywood and was so impressed he financed a demo recording session. That led to their signing with Warner Brothers and the release of their first album – Van Halen – in 1979 with classic hits like Jaimie’s Cryin’, You Really Got Me, and Runnin’ with the Devil.
Van Halen’s music continued to explode into the 80s as they cranked out a stream of popular songs such as a Roy Orbison cover of Pretty Women, Jump, I’ll wait, Panama, and Hot for Teacher. Their high-energy tours also helped to captivate fans who had come to appreciate the flagrant antics of Roth and Eddie’s wildly inventive guitar creations. Van Halen had catapulted hard rock to heavenly levels and they were riding the wave of success.
Winds of Change
However, the effects of stardom began to take their toll on the powerful hard rock band. By 1984, Van Halen was experiencing internal rifts between David Lee and Eddie. Roth was angered by Eddie’s side project of providing the fretwork for Michael Jackson’s hit Beat It that released in 1983 and Eddie was increasingly perturbed by Roth’s uncontrollable antics. The problems couldn’t be resolved and led to Roth leaving the band in 1985. 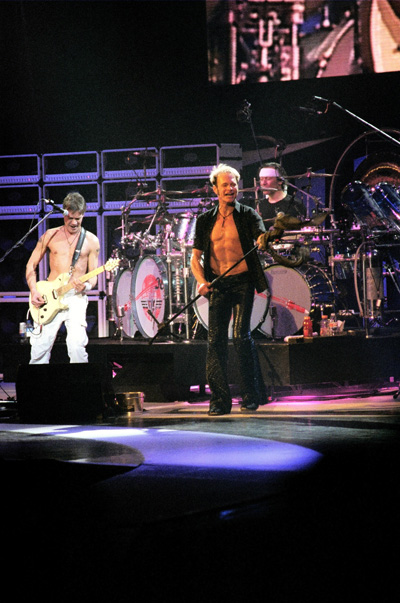